No Widgets found in the Sidebar Alt!

No Widgets found in the Sidebar Alt!

In the United States, it seems, dulcimer fesivals are relatively common. It comes as some surprise, then, to find that here in Ireland there has never been a festival of the dulcimer. Nevertheless, those who play it are devoted to it, and many who attended the festival in Cork from 26th to 28th July 2002 were overwhelmed by the number of instruments on show and the resonant sound of several playing at once.

The informal opening night in the Spailpín Fánach on North Main Street was a highlight of the festival, apparently. I couldn’t be there, but I became aware over the course of the weekend that these are people who enjoy nothing more than simply getting together for a good jamming session. Amongst the participants were some of the stars of the world of dulcimers; but they are spread so thin on the ground that many of them had never met. 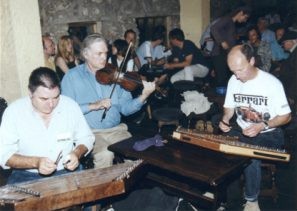 Cork is a small town, and because it was the first ever, this festival was destined to be small too… but the end result of this was that players could introduce themselves to each other, step in and out of the session, watch, have pints and network. It was the perfect atmosphere for a really good meet-the-people gathering where everyone was willing to talk and determined to enjoy themselves.

Saturday morning saw a round of workshops on every aspect of dulcimer culture, with presentations by Barry Carroll, Séamus Brady and Nat Magee, among others. A short break to move the equipment across town, and we find ourselves in Triskel Arts Centre. The Triskel is the perfect venue for a concert such as this: intimate, a 90-seater where the audience can feel the performers are there with them and not seperated by an invisible wall of player vs. punter. Luckily, the performers enjoyed this setting as much as the packed auditorium. And although the dulcimer featured in every set, theere was enough variety on show to educate us all in what the instrument can do. Jenny Coxon (dulcimer) was accompanied by Adrian Schofield on Northumberland smallpipes. They come across as being hugely entertaining to meet even in a supermarket checkout line; put some instruments in their hands and they let rip. With a series of madcap folk tunes from across the islands, each carrying a medieval lilt, Jenny and Adrian seemed to challenge each other and themselves to play as fast and furious as they and we could stand it. A grand way to warm up the crowd.

Jack Bethel (again on dulcimer) was joined by Colin McAllister on bodhrán and Gearóid O Laoghaire on fiddle. Colin, passionate about his native Co. Antrim, sang some incredibly haunting and beautiful tunes and all three played like they had been born with an instrument in their hands. A short break, and then David James took to the stage. Twice world champion on the dulcimer, David performed a solo set with an extraordinary range, not to mention some mind-boggling use of the instrument itself. While the traditional method sees twin hammers used to ring the strings, David enjoyed swapping one hammer for a fiddle bow or even plucking the strings with one hand while using a hammer with the other. 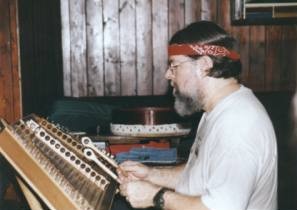 His instrument is also specially fitted with a dampener; the long sustain associated with a dulcimer makes some tunes difficult to play. So he had pedals to work with, too.

Sunday saw Cliff Moses from San Antonio, Texas give a workshop and then come back after a break to regale the assembled crowd at the Corner House, Coburg Street with a solo set of his speciality, Irish trad. I get the impression that dulcimer players throughout the world are intimately familiar with Irish music, as it fits the instrument well. The evening wound down as those who came from afar (and there were many) had to return home. Everyone who remained, however, kept playing until they had blisters, sometimes swapping instruments in the middle of their set. Notably, Cindy Ribet and her accompanists simply leapt into whatever spot on the stage was unoccupied, picked up what was there and played it. Cindy’s own compositions were one of my personal highlights… that and the late-night session on Saturday, where I once counted six fiddles, three dulcimers, and acoustic guitar and a mandolin on the go at the same time! And as for Gearóid O Laoghaire, let’s just say that if he ever meets the devil, I know who my money’s on.